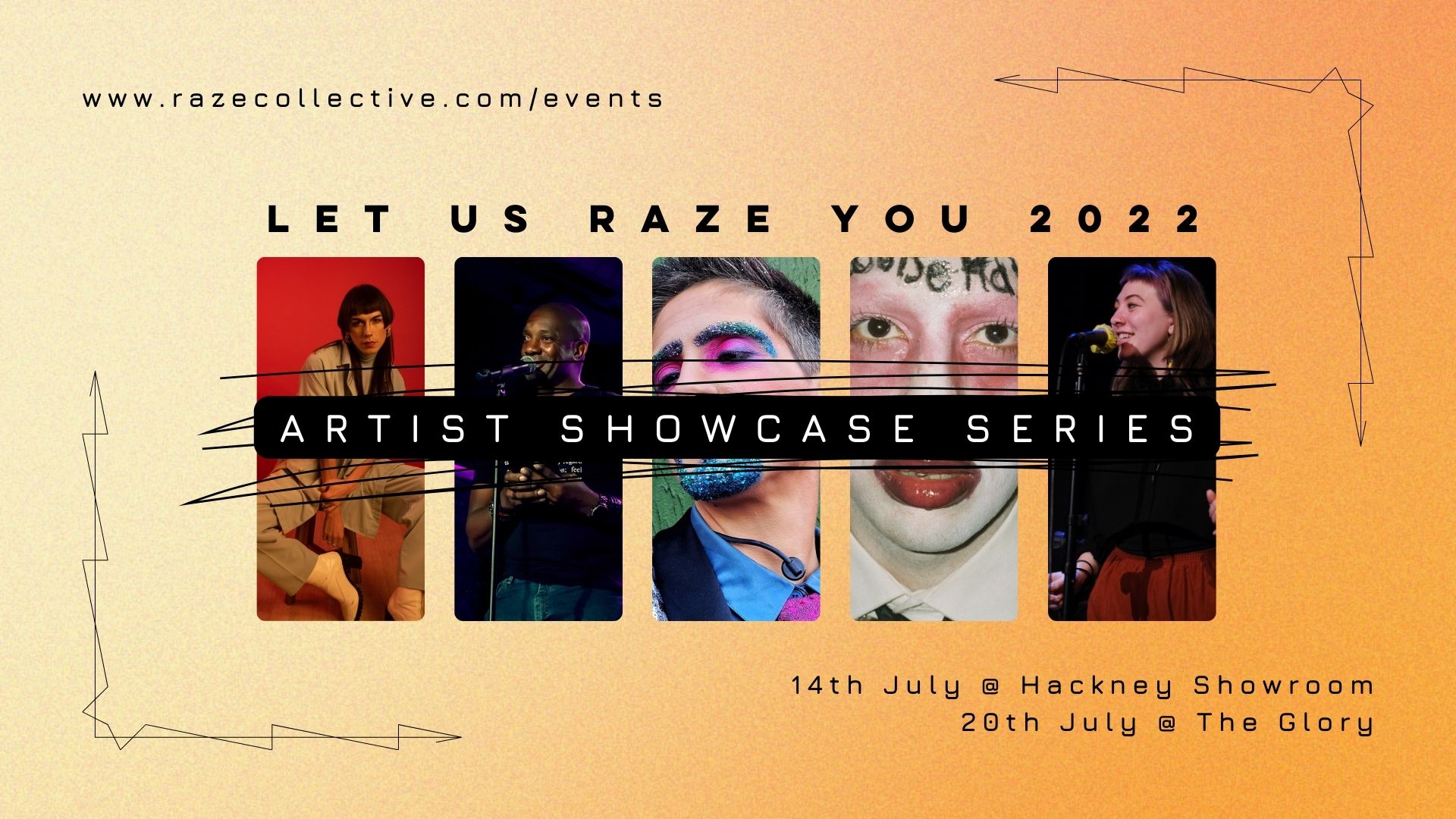 LET US RAZE YOU – Artist Showcase

Brought to you by the Raze Collective

We’re back with our second year of Let Us Raze You and we have incredible things to share !

We have 5 amazing artists working with new ideas and new perspectives, making exciting new work that you won’t want to miss.

This year’s artists are working through drag performance and storytelling to music production and spoken word to movement sound engineering. This year’s Let Us Raze You is not to be missed.

Hosted by the incredible Azara (Duckie), this showcase is a chance to watch the fabulous….
ShayShay (they/them) – A Japanese/Irish non-binary writer, director, nightlife producer, choreographer & drag artist working across theatre, queer cabaret and shows for children & families. They are a co-founder of gender-diverse Pan-Asian artist collective The Bitten Peach. Their work explores gender diversity, Asian identity, and their intersections through subverting stereotypes and transforming underrepresented stories into colourful, dance-filled, musical productions, and has appeared at Underbelly Festival, The Pleasance, The Vaults & Southbank Centre.
Raina (she/they) – A Bristol-based writer and performance-maker. Her work often explores themes of sex, consent, and grief.  They have performed at events like Milk Poetry and Raise the Bar, and received commissions from the BBC and Tobacco Factory Theatre.  Their solo show, MANIC, has received support from Arts Council England and will be at Edinburgh Fringe in 2022.
Tylor (he/they) – An interdisciplinary artist who studied at Rambert School of Ballet and Contemporary Dance. They explore their experiences in an autobiographical process of insight looking at queer identity, commodification of marginalised bodies and trauma in the wake of bereavement. These themes are realised through performance, music, song, film and theatre.
Rick Dove (he/him) – A queer, mixed-race, and neurodivergent poet from London. His writing explores themes of identity, epistemology and social justice using a blend of traditional and free-verse styles in order to interrogate the liminal spaces that define our common humanity. Rick’s work has been published in The Morning Star, Bunbury Magazine, Guardian Online, and Untitled Writers; and he has had poems included in anthologies from Tonic Sta Press, Gug Press, Cipher Press, Nine Pens, and Arachne Press.

Dubbed “one to watch” by 2019 TS Eliot Prize winner Roger Robinson, his debut pamphlet Haigha’s Noosphere Canticles was publishing by WCH Publishing in 2017, and his debut full collection, Tales From the Other Box, was published by Burning Eye Books in August 2020,

A veteran of performance poetry stages across the UK and internationally, Rick was crowned the Hammer & Tongue UK Poetry Slam Champion 2021 at the Royal Albert Hall on 4th July 2021.

Tito Bone (they/them) – Your average blind, non-binary, bisexual drag king who just wants you to smell the world through their nose, ya know? They are a true triple threat: they sing, audio describe, take their clothes off for strangers in the name of intersectional feminism… all while wearing large amounts of eco glitter. Tito’s mission is simple: to entertain the masses through socratic irony, political satire and epic dad dancing. They also strive to prove that making accessible art is the epitome of cool. Tito Bone shares a body with Amelia Cavallo, a multi-disciplinary performer and one half of Quiplash (@quiplashlondon) – a queer, crip (quip) performance project that is taking space for Deaf and disabled people across the LGBTQQIA+ spectrum.

✨ The Glory Downstairs is accessible only via stairs.

REMINDER: This is a QUEER event in a QUEER venue. Racist, homophobic and transphobic abuse of performers, patrons or staff will NOT be tolerated.