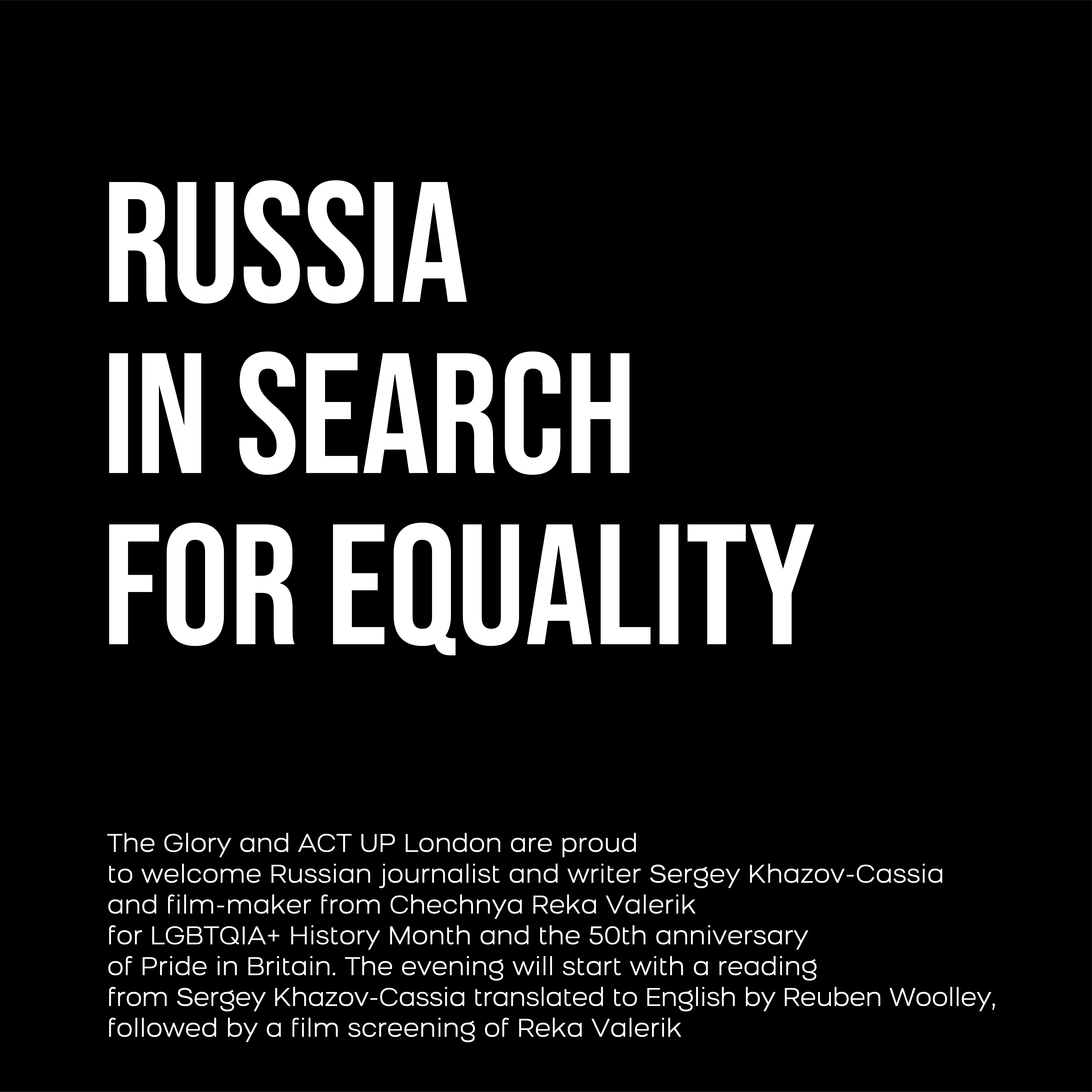 The Glory and ACT UP London are proud to welcome Russian journalist and writer Sergey Khazov-Cassia and documetalist from Chechnya Reka Valerik for LGBTQIA+ History Month and the 50th anniversary of Pride in Britain. The evening will start with a reading from Sergey Khazov-Cassia translated to English by Reuben Woolley, followed by a film screening of Reka Valerik and then DJ’s.

Sergey Khazov-Cassia is an award-winning Russian journalist and writer living in Moscow and working for Radio Free Europe/ Radio Liberty. He is the author of two novels : A Different Childhood (2014) and The Gospel according to (2016). Both novels reflect the life of a gay person first in the Soviet Union and then in the modern Russia. Apart from novels Sergey writes articles and shoots documentary films including on LGBT+ subjects, women rights, immigration, human rights in general.

Reka Valerik is a film-maker from Chechnya living in Europe. His film Silent Voice tells a story of Khavaj, a young MMA (Mixed Martial Arts) fighter, who fled Chechnya when his brother discovered his homosexuality and promised to kill him, under the persecution of Kadyrov’s regime. In Brussels, facing the shock of exil, he is struck by mutism. The only link that he keeps with Chechnya are the vocal messages that his mother sends him. The film traces Khavaj’s first months in Belgium. Forced to live in total anonymity to escape the Chechen diaspora, he will try to build a new identity. The only film screening in Moscow at ArtDocFest film festival in 2020 was canceled under menaces from Chechen diaspora.

Reuben Woolley is a translator from Russian. He is interested in queer history and culture, the political left, Russian literature, and any combinations of the above. Reuben is currently translating  Sergey Khazov-Cassia’s The Gospel According To.

Victoria Suvoroff will represent Moscow Community Center for LGBTQ+ Initiatives. She holds an MRes in Arts and Cultural Research from the University of Brighton, UK. Victoria’s research interrogated representations of Soviet female masculinity through the methods of art-practice and archive-creation with a focus on historically accurate terminology applied to women with masculine traits. Her PhD project at the University of Leeds (UK) focuses on contemporary queer visual art in Russia. As a researcher, a contemporary artist, and an independent curator Victoria is interested in the issues of gender, sexuality, and the transgression within as well as in investigation of different approaches to non-Western cultures from a Western perspective.

The evening will be hosted by Dan Glass, Gay Liberation Front activist, co-founder of ‘Queer Tours of London – A Mince Through Time’ and Bender Defenders  and author of United Queerdom From the Legends of the Gay Liberation Front to the Queers of Tomorrow followed with Q+A exploring how we can build solidarity both in our own countries and communities and from overseas on this special anniversary.
FREE EVENT. DONATIONS COLLECTED FOR QUEER WOMEN FROM THE NORTH CAUCASUS PROJECT

Please expect to have your ‘Covid Status’ checked to gain entry to all busy events at The Glory. You will be asked to show:

Note: The written Covid Vax card is not valid.

We’re doing our best to keep you, our staff and performers as safe as possible. Help us to continue to look out for our community.