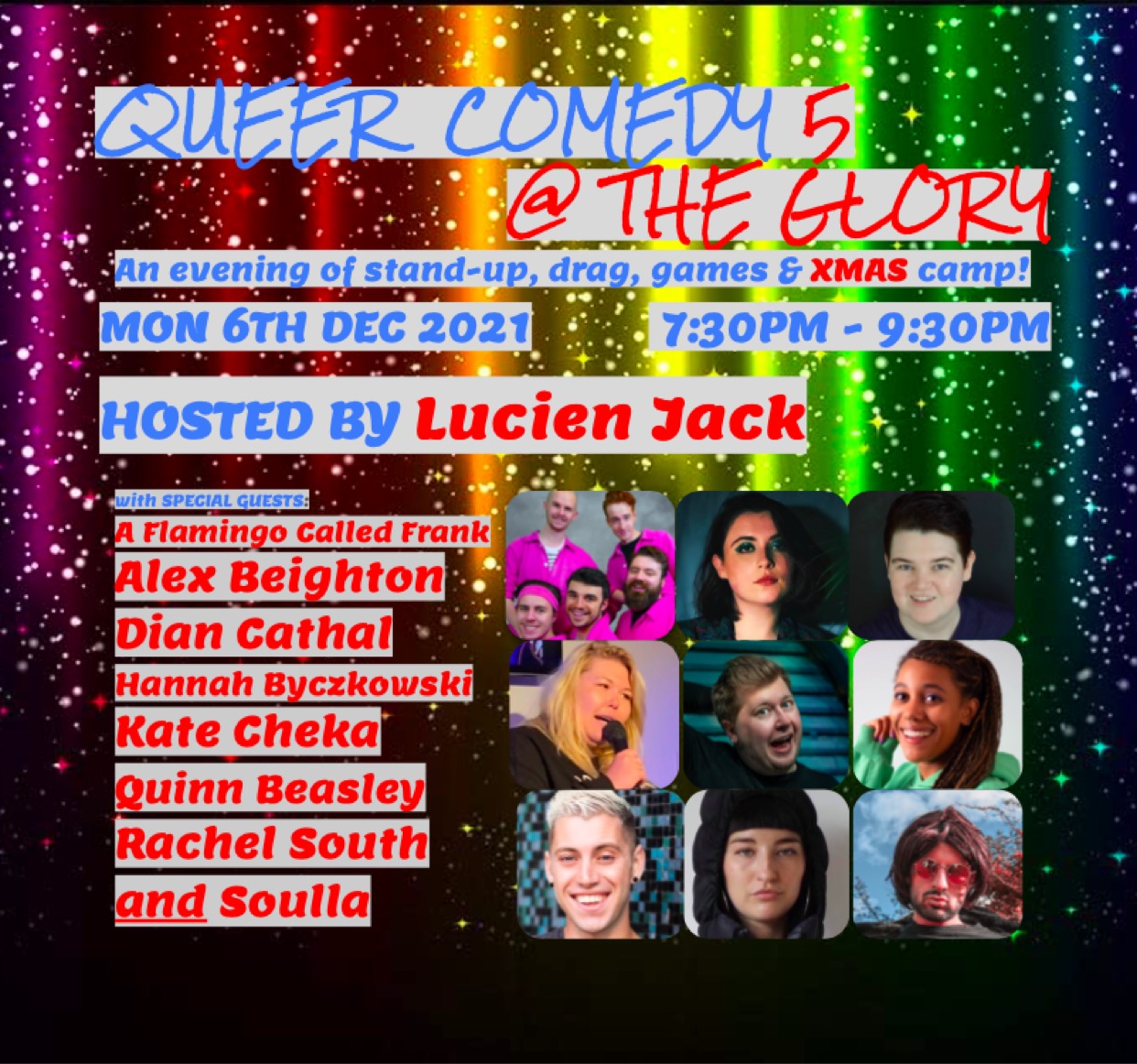 Our host Lucien Jack will be joined by these fabulous performers:
A Flamingo Called Frank
🌈 Jimmy, Joe, Jordan, Luke, and Simon invite you to join us for some not-so-no-nonsense sketch comedy. And yes, we did leave a red sock in the washing machine.
Alex Beighton
🌈 Birthed out of the Soho Theatre kicking, screaming and covered in amniotic fluid. A semi-finalist in 2Northdown’s New Act Competition 2021, a regular at Roast Battle and longlisted for Funny Women’s Comedy Shorts Award 2021. Alex is also regularly gay and gross in front of willing audiences across the UK. “Definitely One to Watch” – Queer Culture Club
Dian Cathal
🌈 As seen on HBO, the Soho Theatre and as several flying babies in Renaissance paintings, Dian Cathal is a queer New Yorker just trying his best not to get deported.
Hannah Byczkowski
🌈 Unapologetic newcomer to the comedy scene, this Scouse minx tells of a chaotic and haphazard life through observational and story telling comedy.

Kate Cheka
🌈 Formerly Berlin-based, she describes herself as having the soul of an African but the voice of an old British man! Gloriously acerbic, her stylish comedy is delivered with a unique blend of joy and distain. Having gigged everywhere from Sweden to Kathmandu, Kate is unshakeably assured in everything she does!
Quinn Beasley
🌈 Born and raised in Vancouver, Canada, he quickly realised humour was his ticket to making a full living on stage. Uniquely high energy and quick timing has brought him as far as the UK, Australia, New Zealand, Thailand, and many more, Quinn brings a fresh worldly perspective while delivering hard hitting laughs and vulnerability. His one man show “The Bro Show” has toured yearly to the largest fringe festivals in the world since 2015.
Rachel South
🌈 Deadpan, cynical and extremely funny, Rachel South is an up and coming comedian who loves to moan. The comic equivalent of a double G&T with flat tonic water.
SOULLA
🌈 North London Cypriot goddess, SOULLA, finally brings her unpredictable madness to life in the heart of London. Get ready for a night of craziness and pure joy.