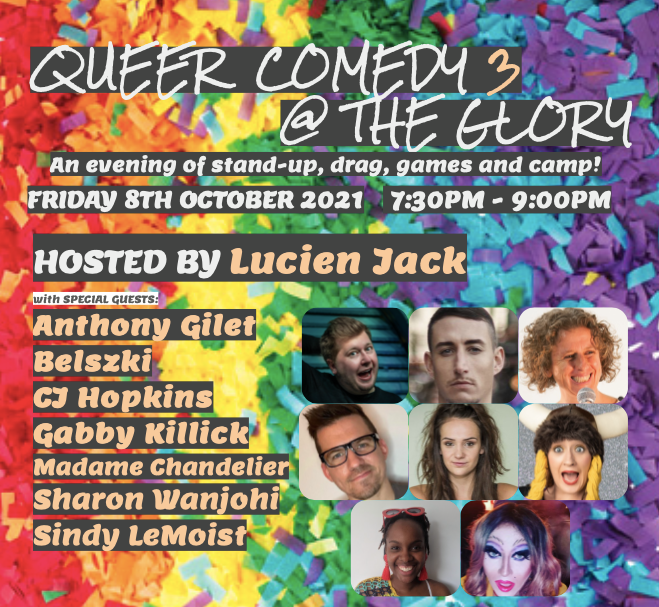 Hosted by the fabulous Lucien Jack, with this month’s special guests:

Anthony Gilét
🌈 Born-and-bred sassy South Londoner, Anthony is a blogger by day, hot mess by night. Having written for some of the most popular gay publications, (Gay Times, QX Magazine) he’s probably most known as the sharp tongue behind straight-talking Cocktails and Cocktalk blog.
Belszki
🌈 Brighton-based writer and performance artist who delivers a fusion of spoken word, stand-up, sketch comedy, improv and cabaret. She tears down the fourth wall and embraces the audience’s ideas, which are used as ideas in spoken word pieces, as well as audience members being invited up on the stage, as part of sketches. Her work is political and feminist, taken from a lesbian perspective.
CJ Hopkins
🌈 Part time comedian, part time personal trainer. Lifting weights by day, lifting spirits by night!
Gabby Killick
🌈 Part time superstar, full time wannabe. During the pandemic, she became a viral sensation with the trend setting “imjustbait” page repeatedly posting short hilarious videos, the most notable being her hit rap song, “Masturbation in Isolation”.
Madame Chandelier’s Rough Guide To The Opera
🌈 Whether you love opera or need to know more so you can pretend you do, Madame Chandelier’s Rough Guide to the Opera has something for you.
Sharon Wanjohi
🌈 Stand up comedian with a varied act ranging from shock to absurd comedy. A current Chortle Student Comedy Award Finalist and Funny Women Stage Award Finalist, with 2 years on the circuit, she talks (maybe too much) about children’s films and the cartoon dilfs that inspired a generation of sexual awakenings. And she thinks Ratatouille is a commentary on race.
Sindy LeMoist
🌈 She is wet and ready to serve you some comedic realness. Sindy is dripping with glamour – a right camp queen with a heart of gold.

Tickets include complimentary entry to The Glory’s club night HAVOC, starting at 9:00pm.