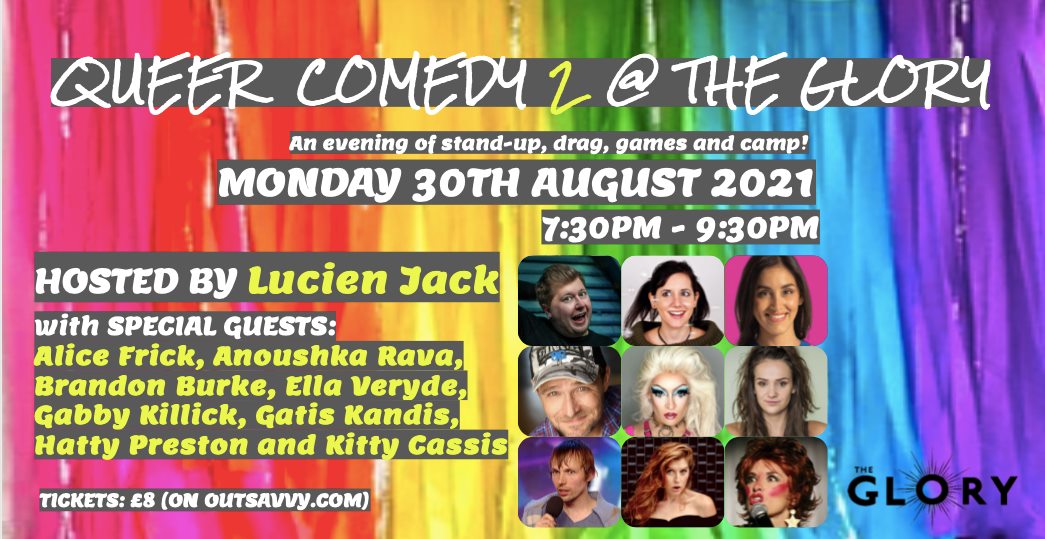 Hosted by the fabulous Lucien Jack, with this month’s special guests:

Alice Frick
Award winning Austrian comedian, Funny Women Finalist, and creator of the sitcom “What the Frick”.  Chats about being a foreigner in the U.K. and coming out gay to her religious grandmother.
Anoushka Rava
Good people do bad things and bad people do good things. Sways brilliantly between both, offering a hilarious mix. French-Iranian, born in London, raised in Paris, this refreshing act tackles current societal matters with lightness and irony.
Brandon Burke
A good ol’ country boy with a dash of red-neck and a helping of queer. Award winning comedian and actor. Not fabulous but he’s a hell of a good time (his own words!).
Ella Veryde
London’s psychedelic shapeshifting spiritual hooker – she’s the bike who gets around *on* a bike…or anything she can ride really. She’s been around the block more times than Lewis Hamilton, and she’ll give you a helping hand if you need your chakras aligning.
✨THIS MONTH’S STAND-UP VIRGIN! ✨
Gabby Killick
Part time superstar, full time wannabe. During the pandemic, she became a viral sensation with the trend setting “imjustbait” page repeatedly posting short hilarious videos, the most notable being her hit rap song, “Masturbation in Isolation”.
Gatis Kandis
Britain’s Got Talent Semi Finalist, Big Brother comic legend and multi-award winning comedian. Originally hailing from Latvia, Gatis is a “real-life Borat” with so much charm, he could sell ice to the eskimos! Although you’d probably expect there to be some sort of refund required.
Hatty Preston
London-born, Chicago-ruined comedian. Actress and stage performer, who has starred alongside Elizabeth Hurley and appeared in the original cast of the Spice Girl’s musical Viva Forever. She currently has 9,722 nectar points and a glittering career in childcare. She also once directed Lucien in a play where he played an XXXXX officer who had to receive a XXXXX from a French XXXXXX onstage. *can’t publish the full answer here for legal reasons*
Kitty Cassis (Aimee Cooper)
Released from her Northern cul de sac to join us for a giggle, a gossip and good old fashioned glow up at The Glory. She’s brought her vanity case and will not be rest until she’s inspected everybody’s backs, sacks and cracks!

(CLICK HERE TO SEE SOME GORGE PHOTOS FROM QUEER COMEDY 1)
Doors open at 7:15pm for a prompt 7:30pm start.